Historic Year for Those Who Quit Smoking with Vapes

Thankfully, it opted not to ban vaping flavours. In doing so, the Government recognised that flavoured vaping has a role to play in helping people to quit smoking.

Flavoured vapes are vital for quitting cigarettes. Former smokers and experts will tell you that when you stop smoking your taste buds and sense of smell returns and you want to get away from the taste of tobacco. That’s where the flavoured vapes help.

*84% of vapers, surveyed in 2022, believed a flavours ban would create a black market for the products. The majority (59%) said they would source the products abroad or online, with many of the online sources selling unregulated products.

This begs the question then – Why are some commentators, with little or no experience in addiction therapy, waging a war against the very product that is helping many smokers escape the clutches of a smoking habit, that is causing immeasurable harm and will reduce their life expectancy by 10-15 years?

It is admirable that many want to see continued efforts to reduce teen initiation to smoking or vaping. Of course, this is incredibly important and that is why we need an under 18s ban. However, we must not take away the contribution vaping continues to make in the fight against smoking addiction.

It is very frustrating to hear some commentators state that vaping is a gateway to teen smoking, despite scientific evidence to the contrary. For example, in early 2022, a comprehensive study carried out by **University College London, found that vaping was not a gateway to cigarette smoking for teenagers and young adults.

The study ruled out previous research that suggested young vapers were prone to taking up smoking. This study included data on 37,105 participants aged 16-24 between January 2007 and December 2018.

It is time these commentators stopped hiding behind the ‘smoke screen’ of inaccuracies. They need to stop ‘bad-mouthing’ vaping and listen to those who have quit cigarettes through vaping. 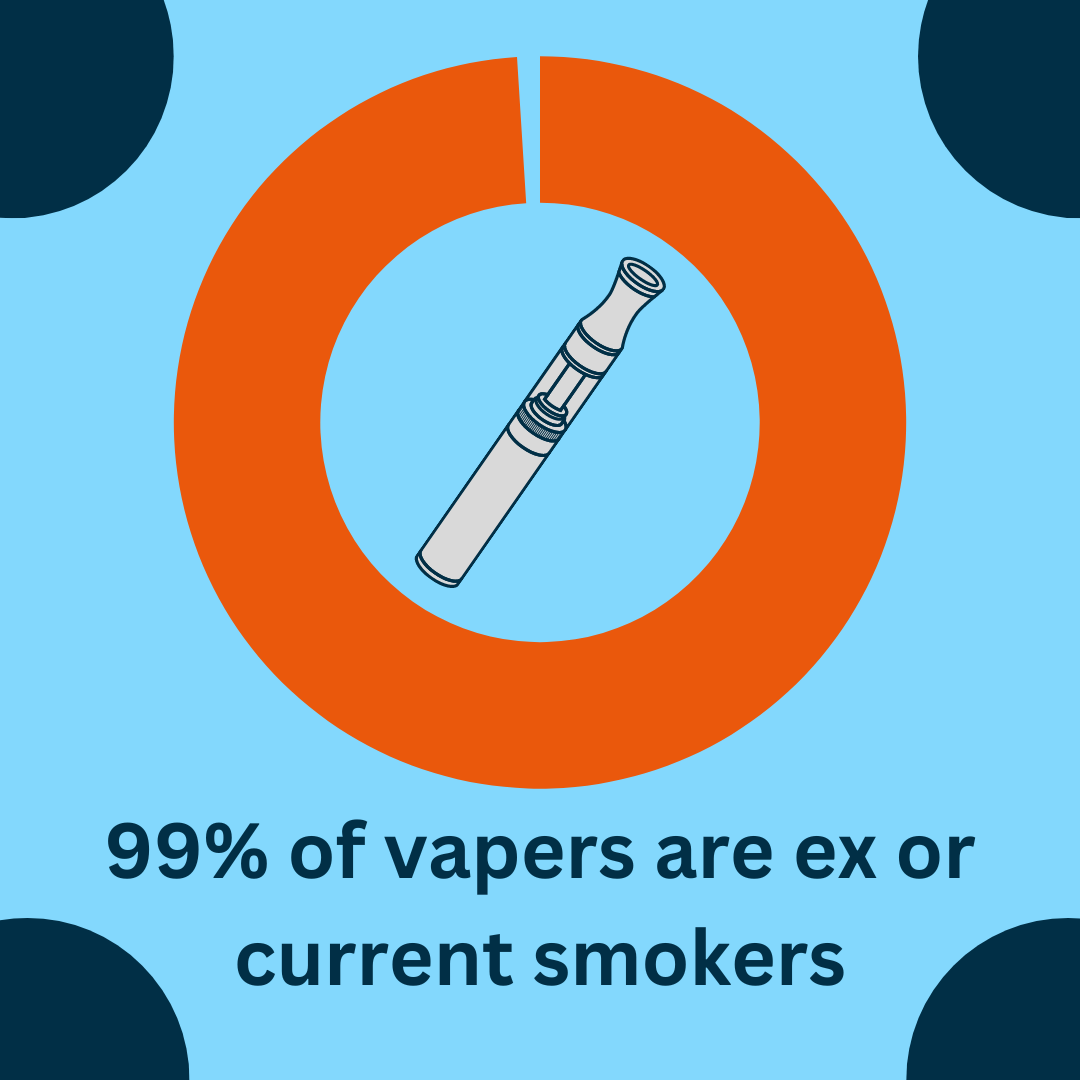 Over 200,000 people in Ireland have quit smoking, thanks to vaping. According to the Government’s own research -Healthy Ireland -, 99% of vapers are ex or current smokers.

Since 2013 the Government has struggled to reduce smoking in Ireland. Back then it was at 25%. Today 18% of the population smoke and this hasn’t budged much in recent years but without the contribution vaping has made in helping people quit during that period, the percentage of people smoking would be up still in the mid-20s.

Respect Vapers commends the Government for introducing a better way of tackling teen vaping by including an immediate ban on the sale of vapes to under 18s with stiff penalties for those caught selling to teens.

The revised Bill, originally passed in 2016, ensures vaping products are strictly regulated in Ireland and the new ban strengthens sanctions on those who sell illegal products.

Over the past year, Respect Vapers supporters have worked hard to provide their local public representatives with accurate and up-to-date information on vaping. We will continue to make sure that TDs and Senators have accurate facts on vaping so they can make informed decisions.

As we come to the end of this historic year, Irish vapers ask legislators to make sure they listen to our stories about how vaping finally helped them quit smoking when everything else failed. These experiences, matched by factual and scientific research will contribute to making Ireland smoke-free.

We use cookies on our website to give you the most relevant experience by remembering your preferences and repeat visits. By clicking “Accept”, you consent to the use of ALL the cookies.
Cookie settingsACCEPT
Manage consent

This website uses cookies to improve your experience while you navigate through the website. Out of these, the cookies that are categorized as necessary are stored on your browser as they are essential for the working of basic functionalities of the website. We also use third-party cookies that help us analyze and understand how you use this website. These cookies will be stored in your browser only with your consent. You also have the option to opt-out of these cookies. But opting out of some of these cookies may affect your browsing experience.
Necessary Always Enabled
Necessary cookies are absolutely essential for the website to function properly. These cookies ensure basic functionalities and security features of the website, anonymously.
Functional
Functional cookies help to perform certain functionalities like sharing the content of the website on social media platforms, collect feedbacks, and other third-party features.
Performance
Performance cookies are used to understand and analyze the key performance indexes of the website which helps in delivering a better user experience for the visitors.
Analytics
Analytical cookies are used to understand how visitors interact with the website. These cookies help provide information on metrics the number of visitors, bounce rate, traffic source, etc.
Advertisement
Advertisement cookies are used to provide visitors with relevant ads and marketing campaigns. These cookies track visitors across websites and collect information to provide customized ads.
Others
Other uncategorized cookies are those that are being analyzed and have not been classified into a category as yet.
SAVE & ACCEPT